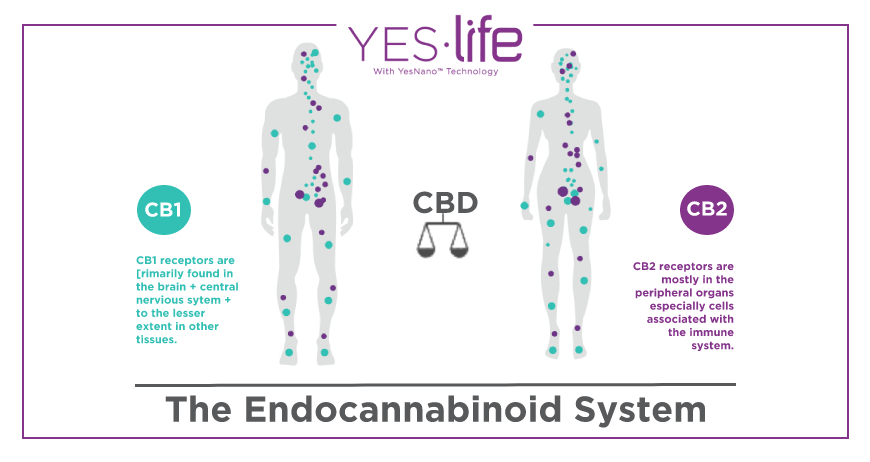 The Endocannabinoid System: What Is It?

Hop over to just about any CBD website, and most of (if not all of) their information about CBD is focused solely on the “Endocannabinoid System.” Many websites (erroneously) state that CBD interacts with the CB1 and CB2 receptors in this system, giving CBD it’s incredible effects. In reality, CBD does not like to interact with these receptors much at all, and in the few times when it does, it won’t really activate them: just block them. So how does CBD affect the Endocannabinoid System? And is it really the root of CBD’s many benefits?

First things first: the Endocannabinoid System (or “ECS” for short) is a system of the body like the nervous system, digestive system, or lymphatic system. Why have most people never heard of it? There are two possible reasons for this. For one, it was only discovered back in the 1990s, and for two, it is – at first glance – a highly specific system, not broadly used as a vital part of human life. However, that second point is starting to change, especially as more research into CBD is done.

The ECS is made of receptors, enzymes, and the natural cannabinoids (or “endocannabinoids,” where “endo-“ means “inside,” like “inside the body”). A receptor is an area on the outside of a cell that is like a door lock. Only very specific molecules with the right shape (like a key) can fit inside these locks. When one of these key molecules bumps into a receptor and they fit, something is activated in the cell. This could be the cell opening a new doorway into itself, or simply the relay of a message to the inside of the cell. An enzyme is like a tiny machine for cells that helps make new molecules or break old ones apart.

There are two different receptors in the ECS, named CB1 and CB2. CB1 is mostly found inside the brain, while CB2 is spread throughout most of the immune system. Contrary to popular belief, CBD does not tend to activate either of these receptors. 1  But it does provide a boost in their activity. How? By affecting the amounts of natural cannabinoids in your body. 2

Your body ordinarily makes two different cannabinoids, called anandamide (or “AEA”) and 2-AG. Each one targets CB1 and CB2 receptors, respectively. Even though your body constantly produces these molecules, they are ordinarily ripped apart by enzymes before they can reach their cell-receptor targets. One such enzyme is Fatty Acid Amide Hydrolase (or FAAH for those that don’t want to accidentally bite their tongues). Amazingly, CBD can turn FAAH off, keeping it from ripping apart your body’s anandamide. Thus, the anandamide you already have can safely reach your brain without being degraded, and provide benefits by activating the CB1 receptors. 2

Activating CB1 and CB2 receptors can lead to some direct benefits, such as the modulation of neurotransmitters in the brain.3 However, there are also many theories that posit benefits of the ECS that we have yet to fully understand. One thing is clear: by taking CBD, you boost your body’s ECS while simultaneously getting plenty of positive effects. How linked are these two? More research needs to be done to determine all the specifics, but it is likely that at least a good number of CBD’s benefits are linked to the ECS.

Using Yes.Life CBD Oil, you can get CBD into your bloodstream incredibly quickly with its water-solubility and nano-sizing. As a result, the CBD can quickly deactivate the enzymes looking to destroy your own endocannabinoids, allowing you to receive the natural benefits of the ECS, in addition to any of the many other benefits CBD has.