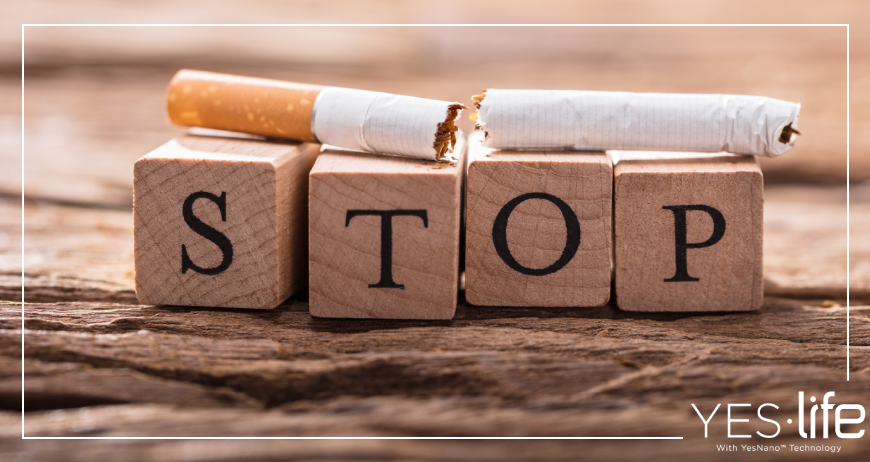 Despite contributing to 1 in 5 deaths worldwide, tobacco smoking has remained incredibly prevalent.1 For decades, an incredible push against smoking, and campaigns encouraging smokers to quit, have fought the good fight but to little avail. While most smokers are aware of tobacco’s many dangers, they often find it too difficult to quit: despite nearly 70% of smokers saying they’d like to quit, only around 3% successfully kick the habit every year.1 Many people look for aid to help them, whether it be a gum, a patch, or even some kind of fancy drug. So what about CBD?

As CBD has grown in popularity, many people have turned to it to help them with this or that. Could it possibly help nicotine addiction? While there is not too much in the way of definitive research yet, some early findings are positive. CBD may not be a cure for smoking-addiction, but it might be able to help a lot. In this article, we will first go over the basic physiology of smoking – what happens in the brain that makes quitting so hard – before turning over to CBD and considering how it might be able to help you kick the habit. Finally, we’ll go over how to use CBD specifically to help you quit smoking.

The Science of Smoking:

Tobacco contains a chemical called nicotine, which strongly contributes to the addictive (as well as pleasurable) elements of smoking. Like most substances “smoked” (or “vaped”), nicotine is quickly diffused into the bloodstream through the lungs. From there, it quickly reaches the brain, and bonds onto special cell receptors that release dopamine. Dopamine is one of many neurotransmitters in the brain – chemical messengers that communicate between brain cells. Dopamine happens to be strongly involved in motivational-behavior: it will commonly release after some kind of pleasurable experience to ensure you engage in that again, like eating good food, making money, or even engaging in “sexy time”. Contrary to popular belief, dopamine itself is not addictive, but it can help facilitate addiction to other behaviors and substances.2

Due to the intense amount of nicotine that rushes into the blood (and brain) from smoking, an abundance of dopamine is released. This strongly reinforces the motivation behind smoking again. It is for this reason that even one cigarette is considered highly risky: enough dopamine release from anything is going to be hard for anyone to resist. Nicotine also lowers the reward threshold in the brain, or – basically – the amount of dopamine required to reinforce reward and establish motivating behavior. This can last up to 30 days from smoking!1 Nicotine won’t just “reward” your smoking behavior – it throws a full-blown party for it.

Nicotine can do more to ensure addiction than just directly messing with dopamine. It can also modulate the release of two other neurotransmitters – the inhibitory GABA and the excitatory glutamate. Nicotine tends to suppress GABA and enhance levels of glutamate, which further messes with the balance of dopamine. GABA ordinarily helps inhibit dopamine, while glutamate increases its activity. This means the other chemicals in your brain will work against you kicking your nicotine habit.1 And still, there is more to be concerned of.

Nicotine enters the bloodstream in such abundance, it quickly saturates many of those cell receptors mentioned before. When the nicotine finally wears off, you can find yourself in a nasty mood dealing with awful withdrawal effects – something that another quick boost of nicotine will help take care of. It is believed that many people continue smoking largely to stave off these withdrawal symptoms, which only worsens the problem.1

CBD and Smoking: Is There Anything to It?

CBD is an incredible little chemical. It can help relieve pain, reduce inflammation, ease anxiety and depression, and even provide a “neuroprotective effect.”3 4 5 6 It has been demonstrated as an anti-cancer, and comes packed with an amazing repertoire of anti-oxidant powers.7 8 But is there any real science to CBD helping nicotine addiction?

First, let’s deal with the “bad” news. In one study, CBD did help with the salience and pleasantness of cigarette “cures” as compared to the placebo. Those administered CBD were less drawn to smoking after, say, seeing someone else smoke on TV than that that were not given it. Even so, this study found that the CBD did not influence cravings, withdrawal symptoms, or anything else associated with those two.9 So, cases closed, right? CBD doesn’t help nicotine addiction? Well not so fast: there’s more to talk about.

It is important to note that the above-mentioned study was done overnight. A single CBD dose was given (800 mg, orally). Many in the world of CBD know that CBD is most effective when used for at least up to two weeks (sometimes four weeks). Furthermore, CBD is an oil – if not prepared correctly, it will absorb very poorly into the body. The study made no mention of whether the CBD used was water-soluble, and mentioned that it was given in a capsule, meaning it wouldn’t absorb under the tongue like most good CBD products. Altogether, this means one thing: the study simply failed to find that CBD definitely does help nicotine addiction. But it certainly did not prove that CBD doesn’t help.

By contrast, another study involved the user of a CBD inhaler over a week. Here, the results are much greater. Those using the CBD (rather than the placebo) showed a 40% reduction in the number of cigarettes smoked during that week! After the week of use, when follow-ups were done without any placebo or CBD, the 40% reduction disappeared: in other words, when using the CBD, smokers were much less inclined to smoke.6 While the research is still early, this certainly supports the idea that CBD can help you kick the habit, at least as long as the CBD is in use. But why would that be?

CBD has an incredible ability to modulate many neurotransmitters. Much of this is done through your own natural version of CBD called anandamide. CBD simply helps boost the amount of anandamide in your bloodstream.10 Anandamide we actually be familiar to anyone who goes running regularly, or possibly performs yoga: it is produced in abundance during those activities, and is strongly linked to the runner’s high.11 12

In the brain anandamide will bond to special cannabinoid receptors – specifically one called CB1 – and can directly suppress both GABA and glutamate.13 14 Glutamate is the chemical that increases dopamine activity, while GABA is the one – ordinarily suppressed by nicotine – that fights back against the dopamine. Given that nicotine is already depressing your GABA amounts, you likely won’t have to worry about any additional depression that comes with anandamide and CBD. Instead, you can benefit from the decreased levels of glutamate, throwing at least one kink into nicotine’s twisted plan for neural domination.

CBD is also known to modulate other neurotransmitters, including dopamine itself!14 Furthermore, it’s natural anti-anxiety and anti-depressant abilities can help you deal with the difficulties of nicotine withdrawal.5 6 More research still needs to be done before it can definitively be said that “CBD helps nicotine addiction,” but the science looks pretty good so far.

How to Use CBD for Smoking Addiction:

It is important to remember that in the study that showed decreased smoking with CBD use, the smoking went back up after the CBD was no longer provided. Keep this in mind if you plan to use CBD to help you overcome smoking – it may simply help in the moment, rather than long-term. Even so, by using CBD in the generally promoted ways, you may be able to handle your addiction quite well. Here is how most people are told to use it.

First and foremost, get a water-soluble product. No, really! If that study using the capsules showed us anything, it’s that the delivery method of CBD is highly important! You can test whether the product you have is water-soluble or not by putting it in water first: if it mixes, it’s water-soluble! If not, then you may want to get your money back. Hold the water-soluble CBD oil under your tongue for 15 to 30 seconds, and then swallow. This helps promote the CBD getting directly into your bloodstream without first going through your intestines (and getting metabolized by your liver!). You’ll want a good-tasting CBD for this (no duh), so consider Yes.Life CBD and its two flavors – Mixed Berry and Cinnamon. There is no point in spending money on a CBD product – even a water-soluble one – if you can’t stand the taste!

With a good, water-soluble CBD oil, you’ll only need around 250 mg. Some people will swear you need more, but that’s only if it isn’t water-soluble. At 250 mg, you are likely well-covered. Take just 1 or 2 ml a day (usually no more than a full dropper that comes with the oil), and you can choose to split this up however you like. Take the full amount in the morning after you wake up, at night before bed, or split it into a half dose and do it morning and night. Finally, pay attention to your own body: if you need more, take more. If you need less, take less!

Hopefully, by following these instructions (and with a good product in hand) you can be nicotine-free! Just remember – quitting is hard, no matter what. Whether this is your first time quitting, or your hundredth, good luck: hopefully CBD is all you need to show tobacco the door for good.

6 Prud'homme, Mélissa, et al. “Cannabidiol as an Intervention for Addictive Behaviors: A Systematic Review of the Evidence.” Substance Abuse: Research and Treatment 9 (2015). https://doi.org/10.4137/sart.s25081.